RadioLab is an exciting, quick-cut, question-asking podcast. Supposedly, it’s about science, but over the years, the questions keep growing. Little questions evolve into big questions if you are dogged in pursuing them as Jad and Robert, the two hosts, are. In “Bigger Little Questions” a kid asks why Earth is called “Earth.” Another question is whether space junk could accumulateuntil it kills, or strands, us. Big Questions indeed. 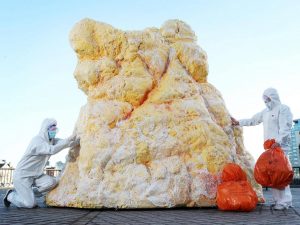 One of the most interesting dialogues in “Bigger Little Questions” is about fat. The discussion starts with a report about fatbergs, huge globules of fat that clog the London sewer system.A fatberg can weigh as much as 130 tons, 11 double-decker English buses, says The Guardian. Gross, for sure, but what’s the big question? How to dissolve it? How to prevent it? For Londoners maybe, but there is a persistent Dutch guy who is obsessed with fatbergs, wants to build one, but more than that, he wants to know where fat comes from. How did it enter the universe, and what good is it? To pursue the question he and colleagues build a purer fatberg than the British one. Partly it is a science experiment, and partly, an art installation. By the end of the “Bigger Little” discussion, it dawns on you that fat is the essential container for human life. Without it, we wouldn’t be.